Are Google Posts Worth It for Roofers? We Look at the Real Numbers.

Are Google Posts Worth It for Roofers? We Look at the Real Numbers.

If you haven’t heard of Google Posts before, you’re in good company.

Google Posts are Google’s latest way to let businesses share news, updates, and special offers with searchers. Google started experimenting with them in 2016 and opened them up to all businesses in June of 2017. Since then, a handful of businesses have published at least one post, but less than a quarter of those kept using it regularly.

While some people in the SEO industry claim that these posts are their “secret weapon” for competing in tough markets, we decided to see for ourselves.

For One Month, We Ran Nonstop Google Posts for Kelly Roofing

Google designed Google Posts to be a little more human than the kind of updates you’ll see on Twitter or Facebook. Google Posts cannot be scheduled, automated, or searched for. There are no hashtags, and they can’t be blasted across several networks simultaneously. They also expire after a week, which means the business (or their marketing agency) has to publish them regularly if they want any chance at seeing results, and that’s pretty much the point.

With that in mind, we published 14 Google Posts for Kelly Roofing over a month, to make sure there were always several active posts. 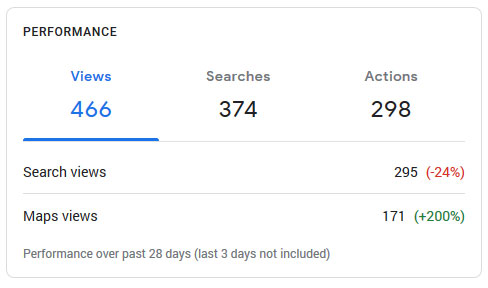 During that same period, the posts were viewed a total of 95 times.

But what about the clicks? Google says “not enough data.” 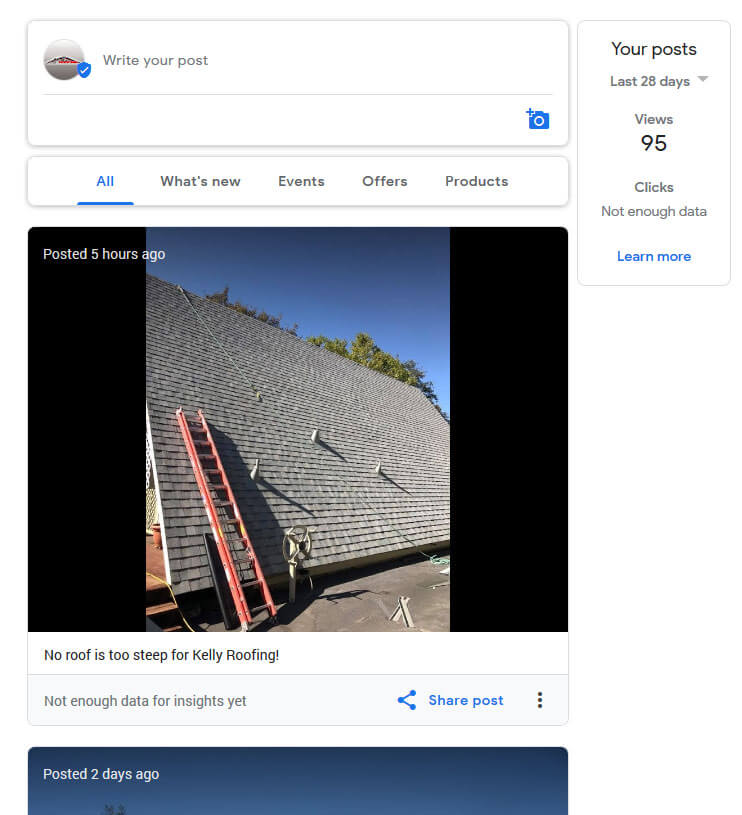 The fun thing about Kelly Roofing is that they have two locations, which allowed us to run a very loose split test. While we published the posts for their much older location in Livermore, the newer location in Sonora didn’t get any posts. Despite that, the Sonora location earned 425 views, including 358 search views (+46%) and 67 maps views (+63%) for the same period. Total actions, meanwhile, totaled 21 for each month. 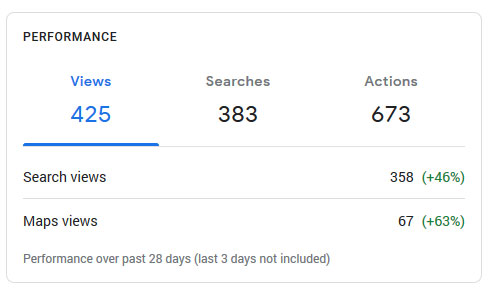 Which Factors Complicate this Data?

It’s also worth mentioning that none of these posts included offers, rebates, or promotions other than “get a free bid.” Most of them focused on photos of past work, unique selling points, and specific products and services.

So are Google Posts worth it, based strictly on their numbers? “We don’t have enough data to show you the number of clicks” is far from a good sign, but that 200% growth in maps views is hard to ignore, especially for an older location.

That being said, the numbers alone don’t tell the whole story.

Historically, Google has shown a little preference to businesses that use their own services. For a while, being a regular Google+ user could help you boost your business’s visibility. Today, Google clearly trusts reviews on Google more than ads on other platforms, even they police those reviews less.

At the very least, chances are good that Google Posts will start appearing in new and more interesting places. In just the last month, Google added the ability for users to follow specific businesses and see their posts prioritized on Google mobile’s new “for you” tab, and that’s probably just the beginning. The real question is if and when these posts will start showing up outside of branded searches. Once they start showing up for “roofers in Sonora” and not just “Kelly Roofing Sonora,” that will be a game changer—or at least a new paid product worth checking out.

But when that time comes, will long-time users have a strong advantage over brand new Google Posts users?

So, at least for now, there are better ways to grow your business both online and offline. And if you want to be sure that you don’t miss the next big update on Google Posts and all the other ways to market you business online, be sure to follow us on Facebook.